Fiat Lux: Doug Argue
When Doug Argue visited this gallery before the exhibition (having been dancing on the beach at Montauk that morning) to measure the huge white walls and scope out the light from the window, he returned to his studio in Jersey City to paint, in a Pollock-inspired explosion of resin with pigment fired into the air onto a canvas on the floor, his magnificent Dancing on the Beach just in time for this show. Argue is an intellectual polymath whose work has been inspired by literature (if you look closely you will see the letters he has lifted from the poetry of Arthur Rimbaud layered on top of the burst), linguistics and physics, including the exact type of subatomic activity involved in the Brookhaven experiments featured in this exhibition. A virtuoso of painterly effects an a lavish scale, in the same vein as Rosenquist, the Minnesota-born Argue’s vast and exuberant works are featured in Conde Nast’s lobby at the World Trade Center. He has a Heraclitean gift for exploring the eternal mutability of our universe: “There are many different histories in the world, and we often see things in the current moment, yet have no idea what lies beneath. There is no still moment. I am trying to express this flux, this constant shifting of one thing over another, like a veil over the moment itself.”

Riding the Learning Curve: James Rosenquist
The complexity of Rosenquist’s Time Stops the Face Continues is the hinge upon which this show pivots. Whether Pollock, Tobey, Poussette-Dart, Norman Bluhm, or Norman Carton, or Barbara Prey and Scott McIntire (where realism stakes its ground ) the near-impossible effort to make the invisible become visible depends upon one medium: painting. Even deep inside the metaphysical labyrinth of his vast and ambitious work, Rosenquist’s late-night brainstorm obeyed his commitment to paint. There is an irresistible charm to the related sculpture, its two pencils sharpened at both ends and spread like the hands of a clock. He shattered nearly a dozen bulbs drilling into them before getting this one right. “If an idea spurs you on to do something, it should have some pictorial power. What does a great idea look like, after all?” Answering his own query, speeding along the learning curve before our eyes, Rosenquist attains the seemingly impossible, bringing Einstein’s warped space-time continuum to the canvas without for a moment relinquishing its painterly integrity. “Art isn’t science,” he once declared. “These recent paintings are intent on saying something about the significance of time, from my own long history of painting and experience dealing with space and spatial compositions.” It is not coincidence that the two series, The Speed of Light and Time Blades, had their genesis just after Rosenquist experienced the Paleolithic paintings and, deeper into geological time, the stalactites and stalagmites of the caves near Guernica.

Deep Space Chronicle: Barbara Prey
Born and raised in Port Washington, Barbara Prey has attained an exalted position in the highly competitive world of realistic watercolor (where the name Wyeth has long reigned) with a body of work that travels the world as part of the United States Art in Embassies program, with her role on the National Endowment for the Arts, and with her historic commission from NASA to paint the extraordinary large-scale works depicting the international space station as well as a commemorative painting for the shuttle Columbia. A graduate of the top-tier Williams College art history program who listens to Bach while she paints, Prey captured international attention with her monumental watercolor that managed the nearly impossible, putting a massive art museum space on the wall as a work of art in a show-stopping work at MassMoCA. An irresistible biographical tidbit: Once an illustrator for the New Yorker magazine, she was later profiled in the “Talk of the Town” when she was commissioned to create the White House Christmas card

Enduring Exposure: Hiroshi Sugimoto and Coolidge
Montreal native Miles Coolidge photographed the active Ruhr valley mine with an 8 x 10 camera, using long exposure times to collect the extraordinary range of textural detail and the way it deflects what must be minimal light on surfaces. He printed them using a carbon-based pigment. This valley is also known as the stomping grounds of Bernd and Hilla Becher, Coolidge’s teachers at the Düsseldorf Kunstakademie. Among the most subtle and unforgettable masterworks of contemporary photography, Hiroshi Sugimoto’s bewitching series of more than 130 Theaters are the epitome of the artistic collation of time and light, delivering the full passage of a movie in one radiant instant. He opens the shutter at the start of the movie and closes at the end, equal to approximately 172,800 photographic images flitting by in two hours). He was 26 years old when he had the idea:

I'm a habitual self-interlocutor.  One evening while taking photographs at the American Museum of Natural History, I had a near-hallucinatory vision. My internal question-and-answer session leading up to this vision went something like this:  "Suppose you shoot a whole movie in a single frame? "  The answer: "You get a shining screen. "  Immediately I began experimenting in order to realize this vision. One afternoon I walked into a cheap cinema in the East Village with a large-format camera. As soon as the movie started, I fixed the shutter at a wide-open aperture. When the movie finished two hours later, I clicked the shutter closed. That evening I developed the film, and my vision exploded behind my eyes.

The son and grandson of eminent American sculptors, Alexander Calder is a legendary figure in the history of Modernism. A trained engineer, at home with problems of torque or vectors, he was fascinated by astronomy. One of the most famous of the many Calder anecdotes is this often-quoted epiphany from a June 1922 trip on a steamer when he shipped as an engine-room mechanic on a voyage from San Francisco to New York:  “It was early one morning on a calm sea, off Guatemala, when over my couch—a coil of rope—I saw the beginning of a fiery red sunrise on one side and the moon looking like a silver coin on the other. Of the whole trip this impressed most of all; it left me with a lasting sensation of the solar system." The exquisite equilibrium of his mobiles bears its own Einsteinian logic.

The Lightness of Being: Mark Tobey

Like Jackson Pollock, Doug Argue and James Rosenquist, Mark Tobey is a connoisseur of flux. An ardent student of Zen and Baha’i, he left his small-town Wisconsin birthplace for the Art Institute of Chicago, followed by a pilgrimage to Haifa, Sinai, Mount Carmel, and Akka, and a stint as a teacher at the Cornish School in Seattle, where Merce Cunningham and John Cage also taught. The calligraphic dynamism of his gouaches owes a great dal to the sumi (flung ink) training he had in Japan. The web of marks is similar to Jackson Pollock, but the cloudlike effect of color floating on top of color, backlit by an inner light that resonates with his spirituality, bears comparison with Rothko. A composer, capable keyboard player and poet, his “Portrait” echoes the Asian translations of Ezra Pound:

You are as a dead thing living…

One form the mountains, walking in the valleys,

And your face has the sadness of pale imprisoned moons.

You are like a white lotus, floating upon an opal sea,

Men dream of you, but do not find you,

The ascetic path in art is not always spiritual, but the labyrinthine meditations of the German photographer Christine Matthai submit to metaphysics with a heartwarming sincerity. The beaches of Bermuda, East Hampton and Miami (where she divides her time) are more than inspiration, because The Architecture of Sound is composed of layers of sand, gold paint and glitter over photographic images of the sand patterns overlaid by the numbers of the frequencies of the six ancient solfeggio scale (396 Hz, 417, 528, 639, 741 and 852). The healing properties of the tones join with their aesthetic resonance in an experience similar to listening to the melismatic chants of Hildegard von Bingen (who additionally wrote books about medicine and language).
Matthai’s Jungian SACRED PATH II is, in the author’s words: A journey to quiet the mind and open the soul. I explored ancient symbols, historical imprints such as labyrinths, sacred architecture, symbolic geometric shapes and proportions. I was particularly intrigued by labyrinths, the more then 4,000-year-old winding path for walking meditations, and mandalas as spiritual tools for guidance to meditation and establishment of sacred spaces…The circular path to the middle symbolizes clearing, the path back symbolizing a strengthened mind. 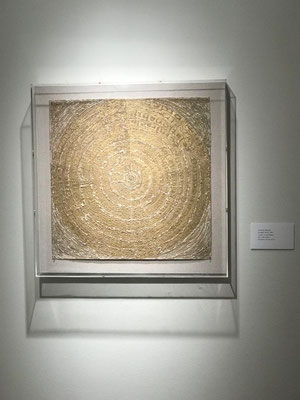 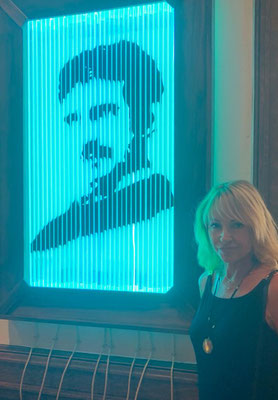 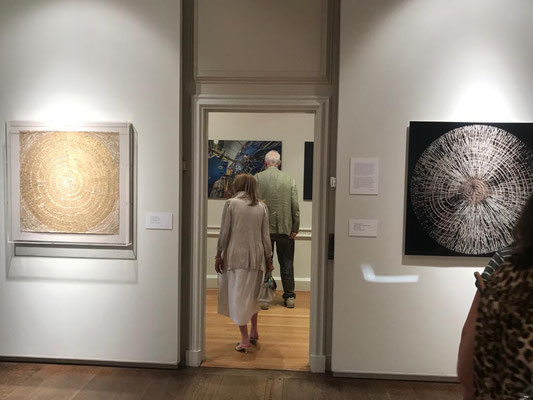 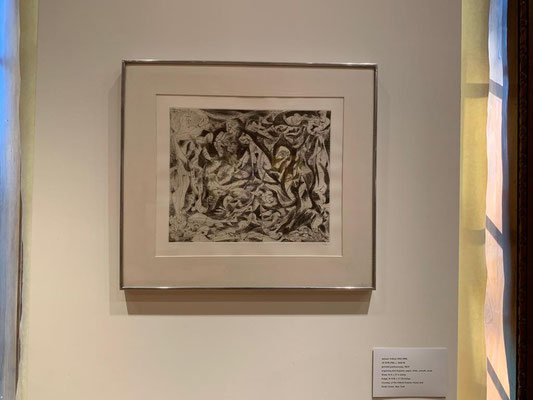 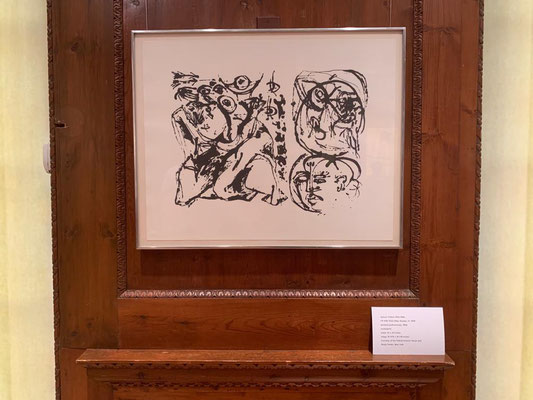 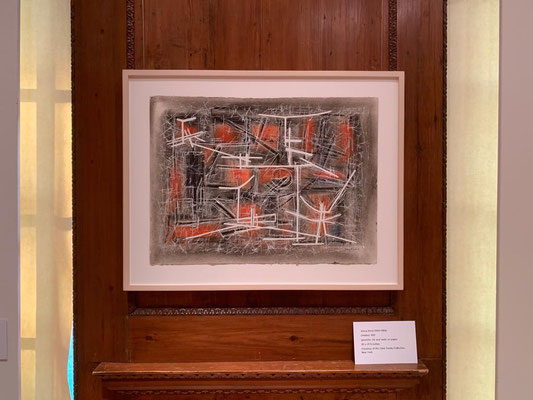 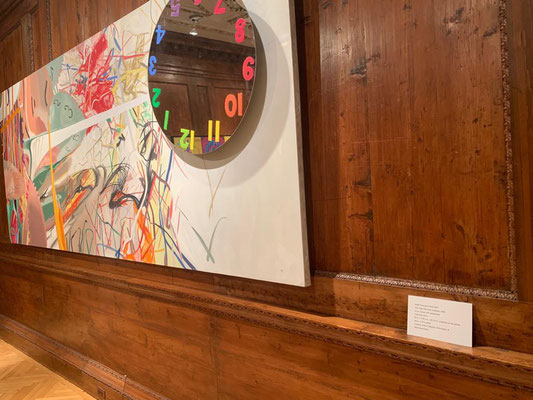 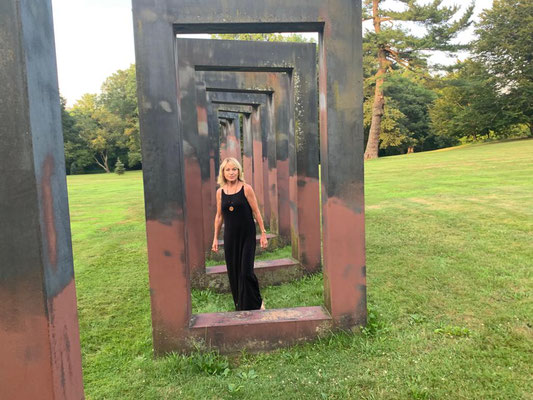 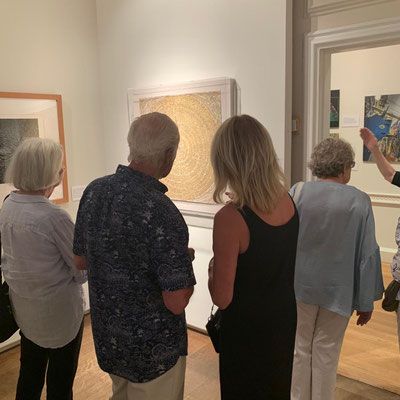 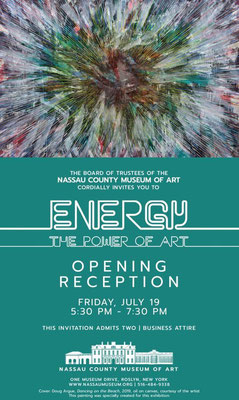 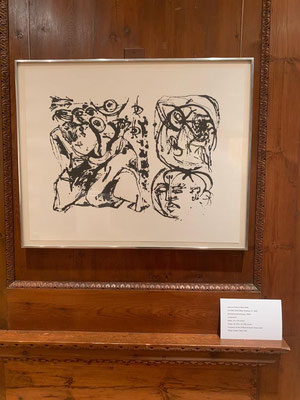 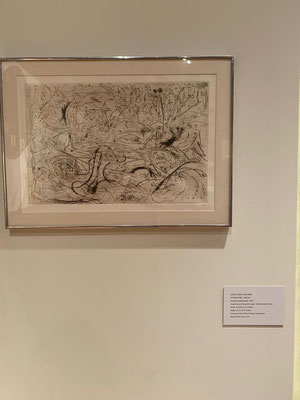 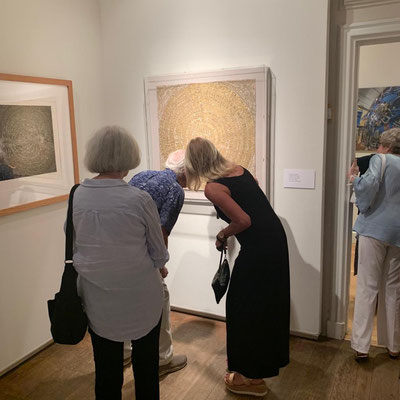 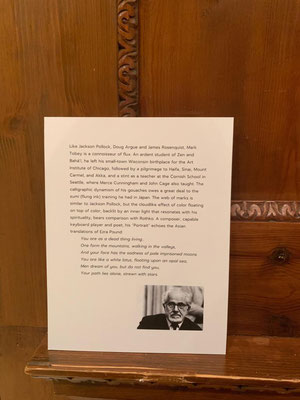 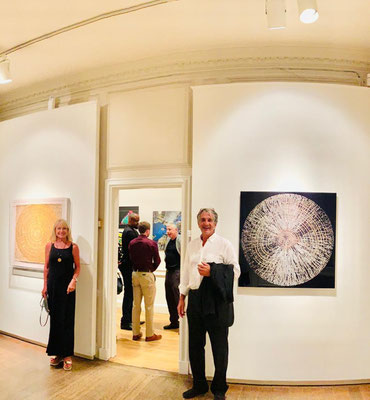 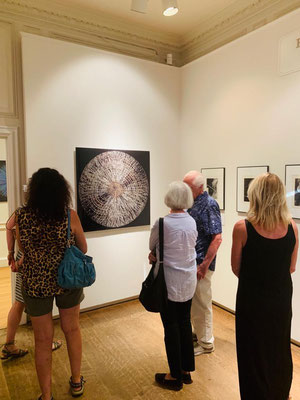 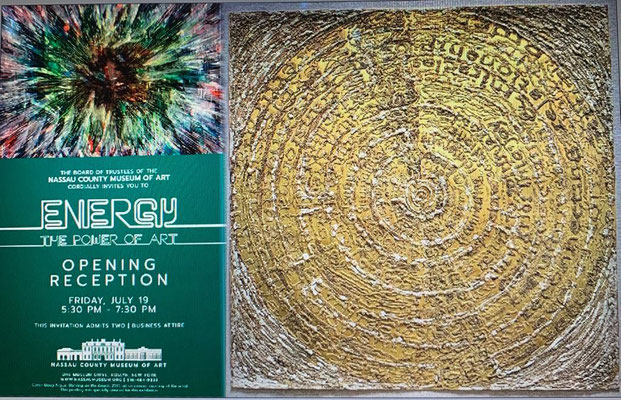 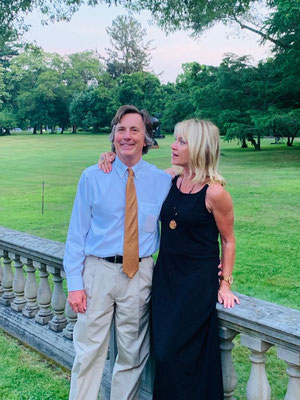 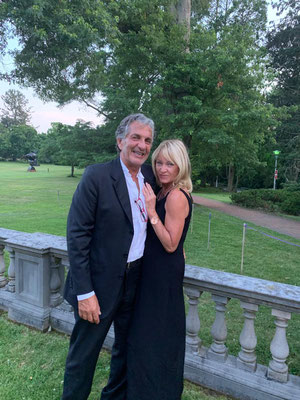